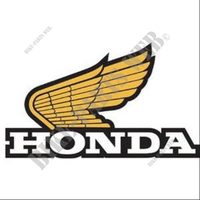 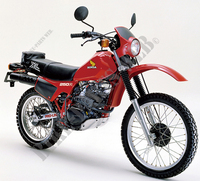 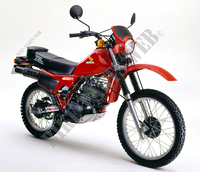 HONDA XR250R from 1986 with single carburetor 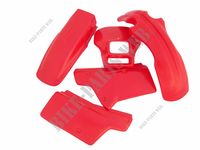 CYRIL NEVEU HONDA XR550 PARIS DAKAR 1982
For 1982 Cyril Neveu was an official Honda rider. He has already won the PARIS-DAKAR twice on Yamaha and in 1981 he finished last on an unreliable and under-prepared Honda XL. 5 bikes will this time be prepared by the Honda Japan Research and Development department. Reliability will be the key word. Honda use the XR500R and makes some little modifications. 4 speeds instead of 5 for stronger sprockets. A custom-made clutch cover which increases the oil capacity by 0.5 liters and allows the connection of an oil cooler. Double ignition, always for reliability. The cylinder head of the XR500 is recharged by welding and then machined to receive bearings for the camshaft (which will allow running with a low oil level if necessary). The XR500 intake valve box is removed. Keihin supplied a special PE38 4-stroke prototype carburetor. The cylinder as well as the clutch cover was made by sand foundry in order to receive a 94mm piston boosting the cubic to 550cm3. The original XR500 crankcase has only been touched up to allow the piston to pass into bottom. Chassis, a bigger front fork (the bike we are working on was updated with a disc brake which is the evolution for the 1983 Dakar, rider Philippe Joineau). The rear brake cable has been replaced by the rigid rod of the XL500R. (still the idea of ​​reliability of a metal rod compared to a cable). For the tanks there was a 40 and a 50 liters version depending on the trips bringing the theoretical autonomy up to 1000km! On the lighting side, a long-range headlight has been added, controlled by a switch of CB125K5. An aluminum plate attached to the handlebars for navigation. At that time they left with a stack of sheets for road books and tore the sheets as they went. CLASSIC RED restores this XR550 in memory of this memorable year. This super reliable XR550 called XL550 will allow Cyril to win all the following events of the 1982 season!
Read review
XR HONDA, she come back !
March 2021, Moto Verte the most famous french off road magazine publishes a report on our Honda XR specialist restoration activity.
To sum up, we restore as close as possible to the origin which is a real challenge because most of the parts are no longer available. The first customers will therefore necessarily be the best served.
We have the motivation and the material to work 'red nickel' with passion above all.
Read review
Classic Red Blog 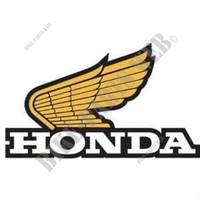 We use cookies on our site to collect statistics on visits. By clicking on I accept or by continuing on this site you accept the use of these cookies. More infos...
A Question ?